I just learned about the artist responsible for a huge mural depicting the Niagara Escarpment that has been on an exterior wall in downtown Georgetown for years. Robert Johannsen recently contacted me about an exhibition he’s having this month, and I took the opportunity to find out about this iconic mural. 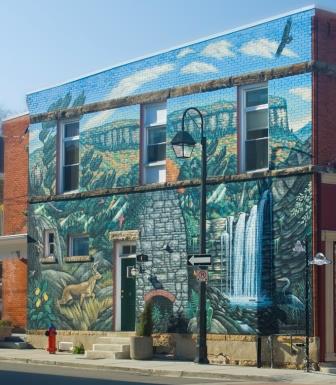 The Niagara Escarpment mural at the corner of Main St. & Wesleyan in downtown Georgetown

I asked Johannsen how he came to create this work. His words are below. All images in this post were provided by him.

In 2004, Artworks Georgetown, which I believe was part of the BIA, advertised a call for entries from artists to do a mural on the building at Wesleyan. Entries were submitted from many artists from across the province and the country. I submitted a pencil sketch which made it through the first round of selections. All artists remaining needed to now submit a full colour maquette, which is a painting of the mural proposal. My proposal was eventually chosen by the committee.
The original sketch and colour maquette were both hand drawn by me. The next step was to get the sketches onto the wall. The exterior needed to be prepped by first sandblasting the surface and then applying a very durable exterior primer. After that, the scaffolding was mounted. Georgetown’s Sandy MacKenzie was the man in charge for these procedures.

The scaffold for work on the Niagara Escarpment mural

Next came the actual painting. Rather than project the image onto the wall, I decided to paint it freehand using my colour sketch as a guide. I sketched out the art onto the wall using brush and black paint, then followed up with the full colour rendering.
On the very first day, which was very windy, I realized while I was at the top of the scaffolding, that I had a fear of heights. This stayed with me for the first week or so, which made painting at the very top a little tricky. Eventually, the scaffold became my second home and I was able to climb up and down the four levels with complete comfort.
There were surprises along the way, including a powerful lightning storm that blew through Georgetown. I had spent an entire morning painting the waterfall portion, when I noticed the clouds getting quite dark. When I saw the first flash of lighting followed by a loud rumble of thunder, I realized that I needed to get off that aluminum scaffolding as soon as possible. I was able to safely shelter myself and all my materials before a massive downpour of rain which lasted about half an hour. When I came back out, I saw that the rain had completely washed away the waterfall that I had painted that morning.
It was August, so many days were very hot and the bright sunlight often made painting difficult. But the long summer days meant that I could start early in the morning and stay until late in the day. After four weeks, the mural was finally completed.

The Legion building before getting the artistic treatment

The Legion with Robert Johannsen’s murals.

Johannsen with a distinguished veteran

Robert Johannsen will have an exhibition of his acrylic landscape paintings at Williams Mill in Glen Williams Nov. 13 to 24. The opening reception will be on Nov. 16 from 5 to 9 pm.

There’s more here about Robert Johannsen. Perhaps someone will leave a comment identifying the veteran in the photo with Johannsen.

This site uses Akismet to reduce spam. Learn how your comment data is processed.